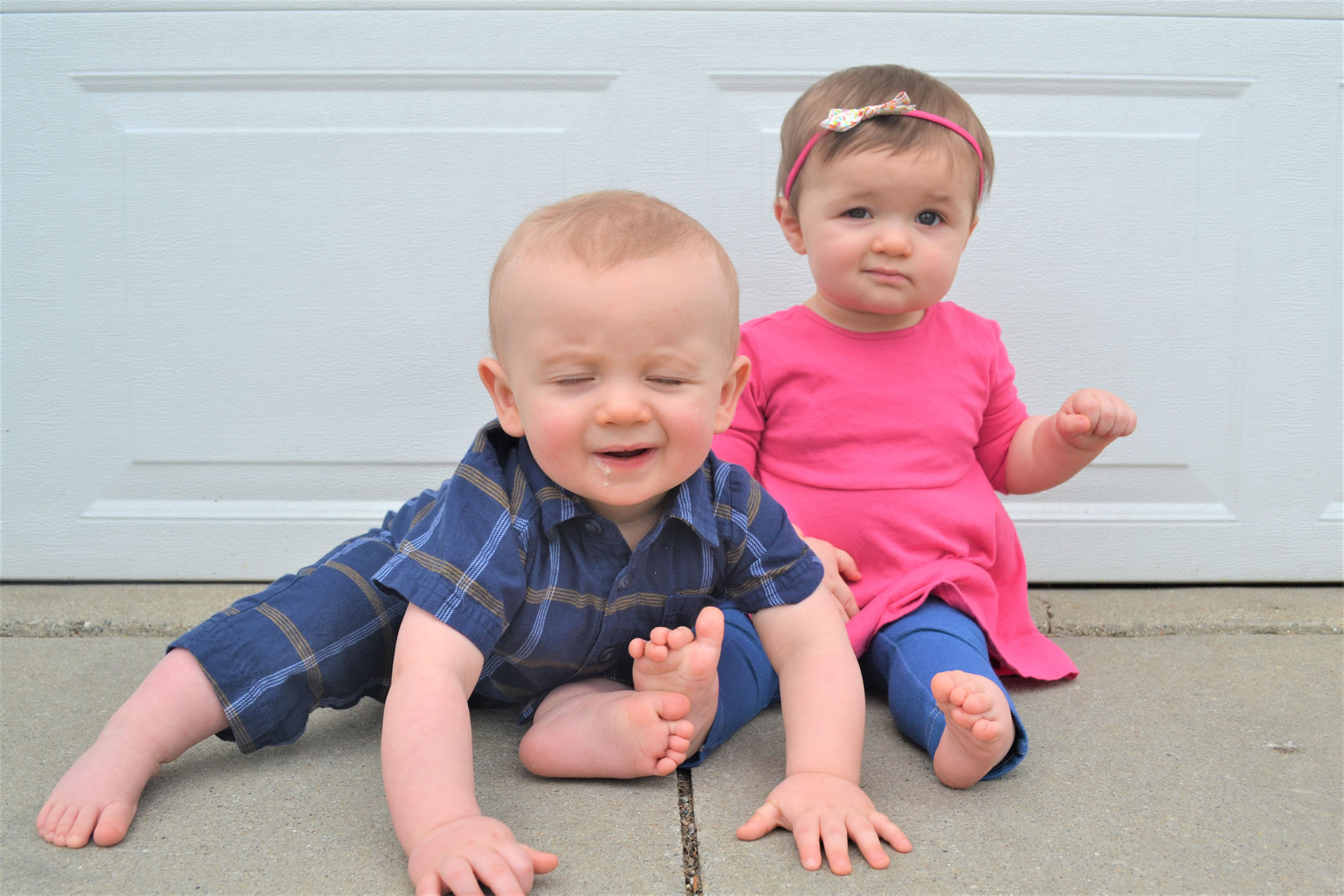 Gosh, I’m the worst at doing baby updates. Mason and Harper are nearly ten months old now (oops). I was just re-reading my six month update on them and I can’t believe how much they have changed in just three short months. I keep wishing and praying that time would slow down, especially since these are our last babies. I tear up just thinking about it! 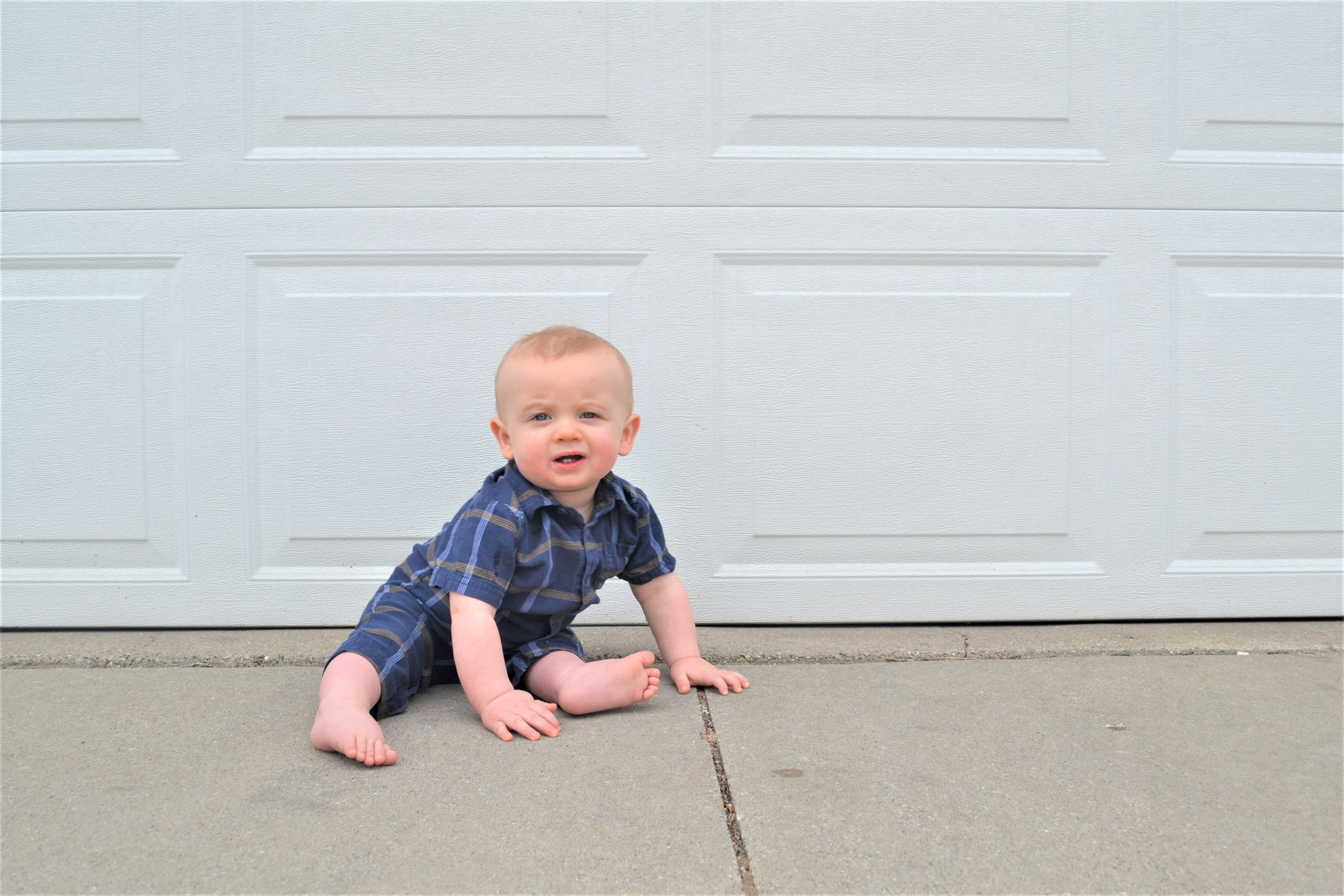 Mason, or Mister as we like to call him 🙂 is still as sweet and happy as he has been since the day he exited the womb. He is so smiley and full of emotions. He is full blown crawling now. Like super speed crawling. I keep a permeant border of crap around my living room so he can’t escape. At least he makes me get all my steps in every day. 😉 He is also pulling himself up on furniture, so naturally bumps and scratches are starting to be regular occurrence.

At their nine month peds visit, Mason weighed 19lbs, which is in the 50th percentile. His head size is finally back on the charts and his height is the 98th percentile. His favorite food is currently spaghetti and mac n cheese. He also loves annoying his sister, touching stuff he shouldn’t touch, crawling places he shouldn’t crawl and smiling. #1 on his love list is still his mama though. 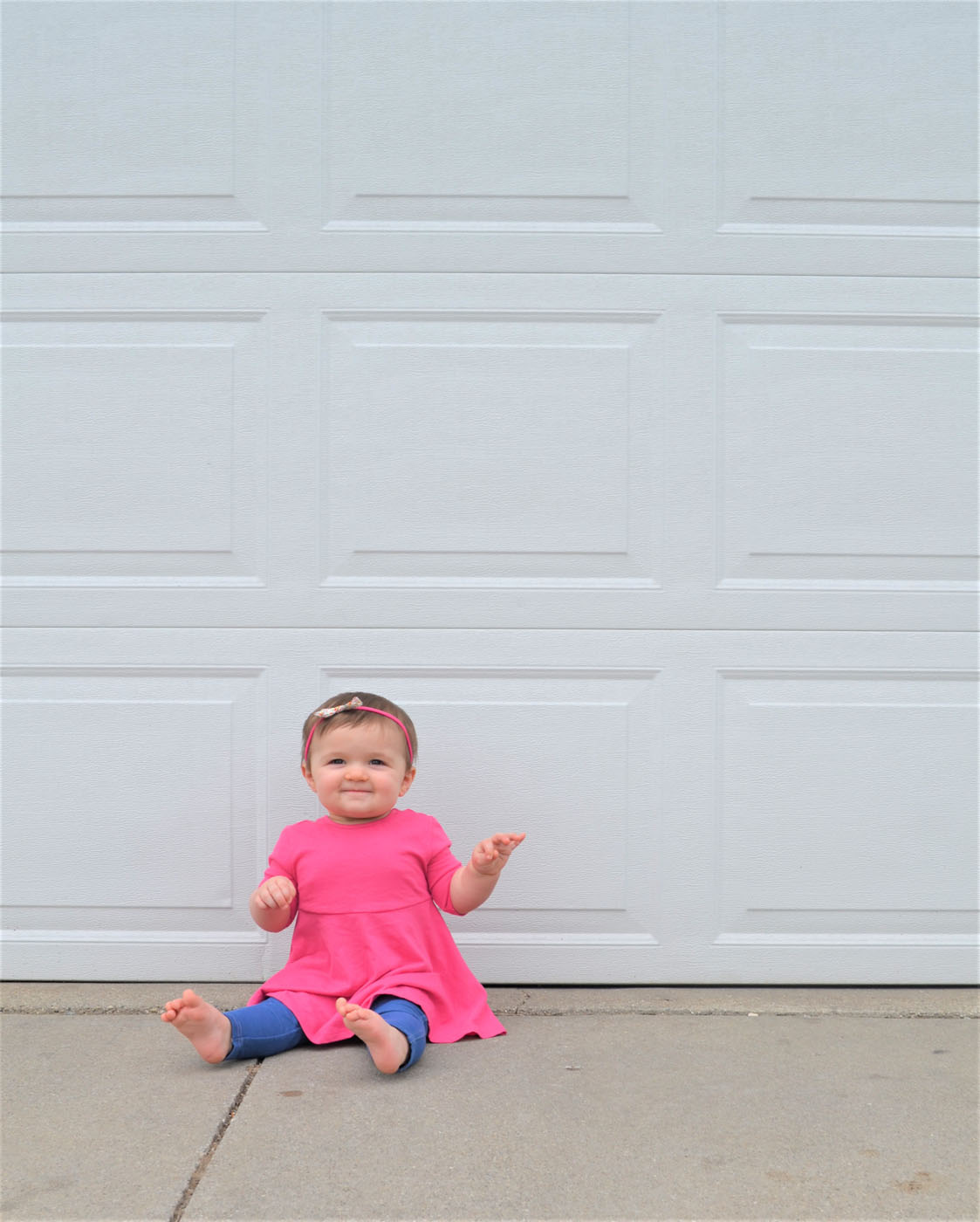 Little Harpie is the BEST baby in the entire world. She is so easy going and can entertain herself for hours. My favorite thing that she is currently doing is clapping. When I walk into their room in the morning or come home from grocery shopping she will get so excited when she sees me and starts clapping. I die a little every time. She is JUST starting to crawl. It is kind of a dead leg crawl but she’s almost getting it. She isn’t standing up yet like her brother but I’m sure she will be soon.

Harper weighed 21lbs and is top of the charts for height, weight and head. She’s a big girl! She loves to eat puffs and other snacks but also loves scrambled eggs and spaghetti. She absolutely HATES peas. If I put just one tiny pea in her mouth she will projectile vomit everywhere. Harp loves toys, turning on daddy’s xbox, and eating. A fun fact about Harper is that her eyes change colors. Most of the time they look green but other times they are a dark blue. I’m anxious to see what she ends up with! (NONE of my kids ended up with my brown eyes!) 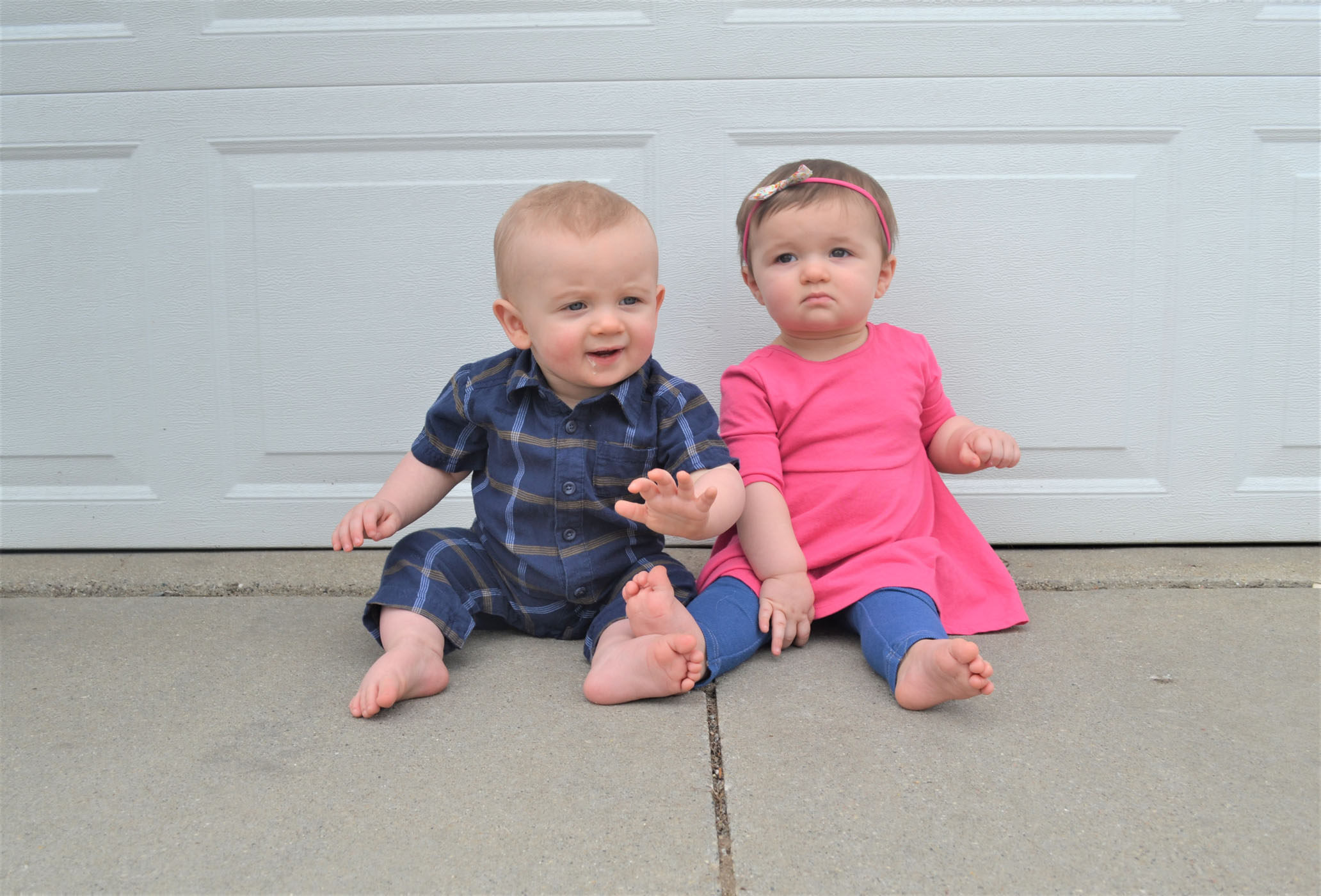 Their sleeping has been all over the place lately. It’s like they go through weird phases where they wake up multiple times a night. That will usually last a week or two and then they go back to sleeping through the night for a few weeks. Last night they slept from 7:30pm-7:00am. It really is just hit or miss.

The best advice I have for this age is don’t feel pressured to feed your kids certain things. My pediatrician gave us the okay to feed them whatever we are eating (with caution.. obviously I’m not going to give them a steak). But if your baby doesn’t seem ready to eat solids then wait. You know your baby better than anyone else and you will know when they are ready to move on to the next phase. I have friends whose babies were eating solids at 4 months. Mine were not even close to being ready that young. MAMAS KNOW BEST — go with your gut.

BTW– these pictures are from the first time they sat on their own outside! They were so confused and weren’t sure about the cement or grass. haha! 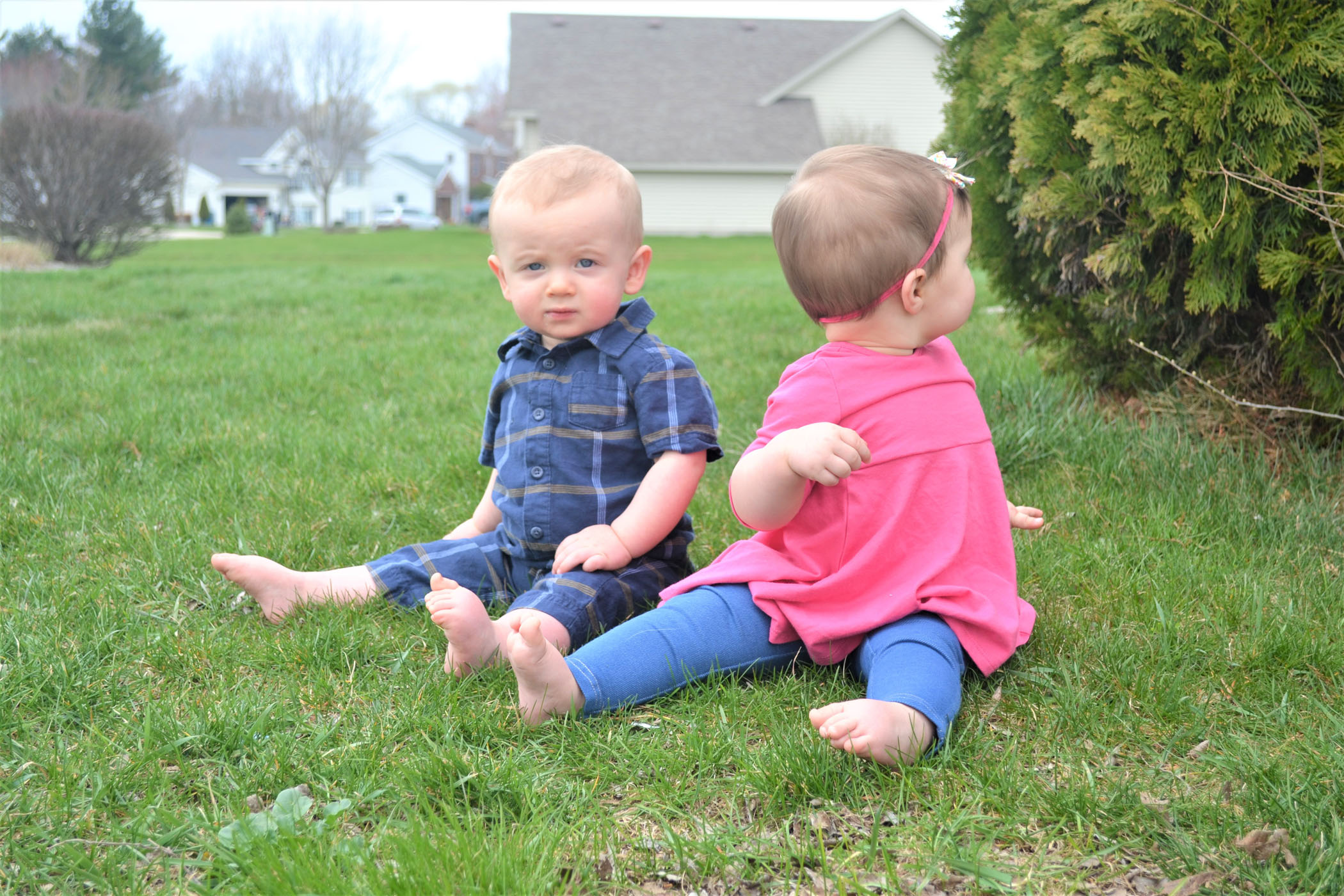 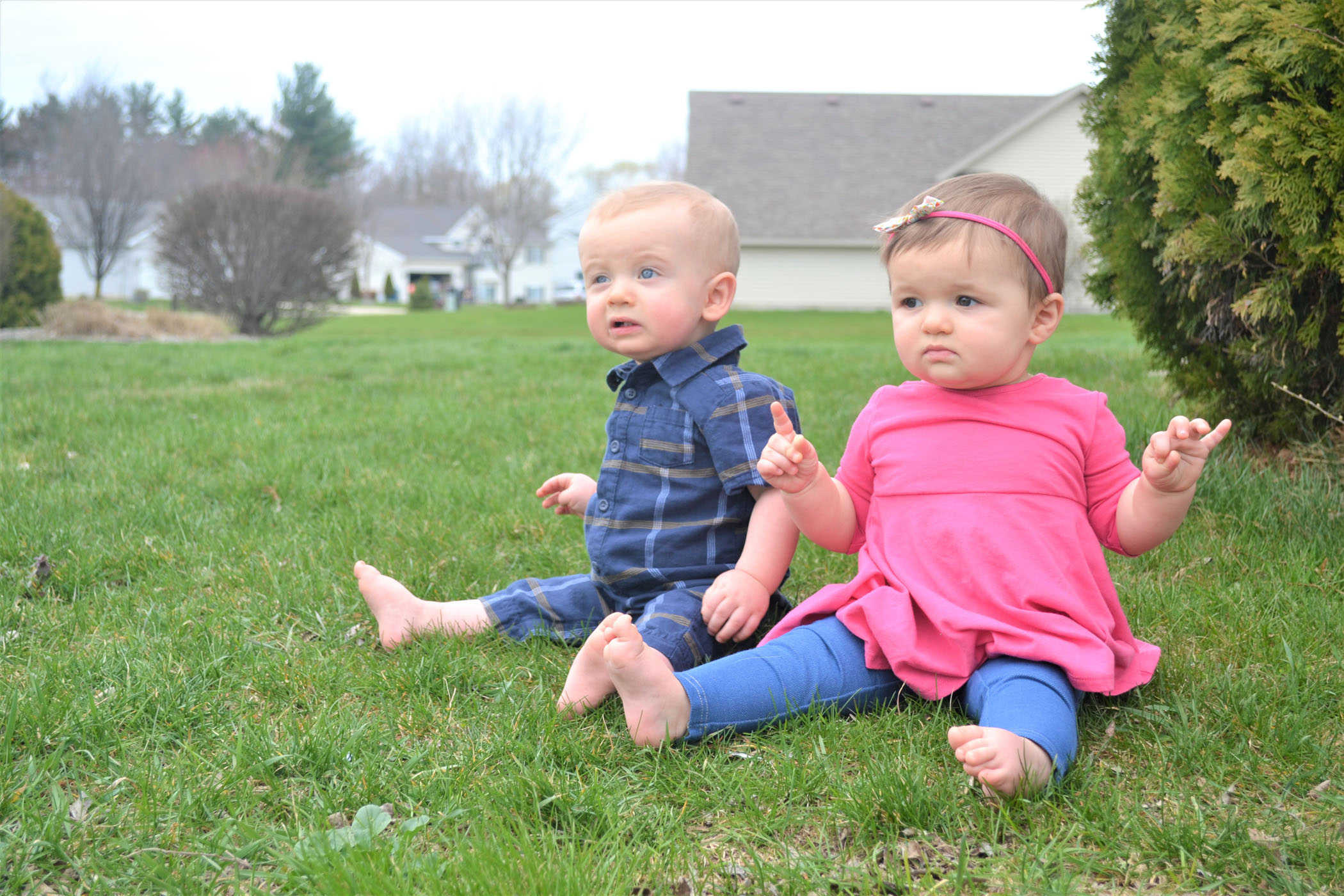 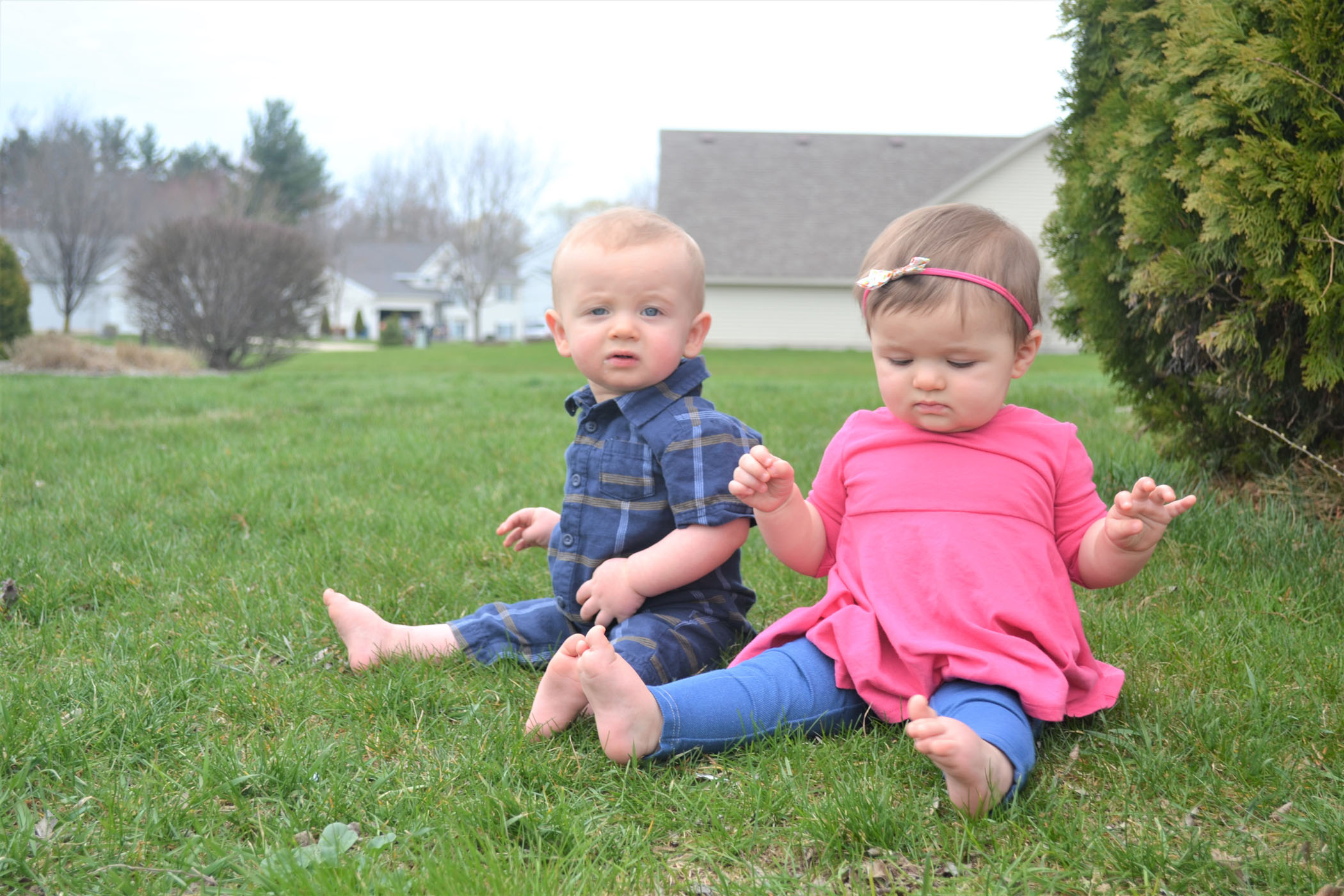